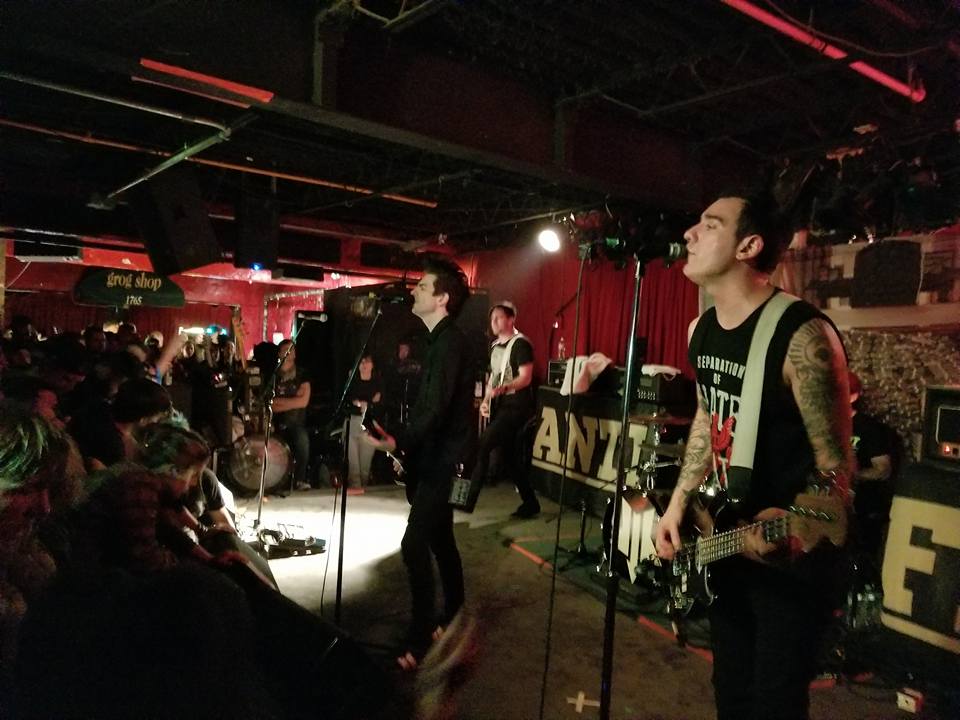 When I was around 13, I came across a band called Anti-Flag. My introduction to punk rock. Fast forward and they’ve been playing for years, still touring and still putting out new music – and I’m still listening to them. Two of the band members recognize me due to them doing a side project years ago and me being one of the first ones to support them & go to shows – A friend (who I met through Anti-Flag’s fanbase – was also part of a project we were doing based on that band, general love within the community while supporting creativity. They’re all amazing guys and put on a hell of a show. I mean, I have the bruises to prove it. Sadly the drummer wasn’t at the show last night due to a death in his family, so their drum tech learned all the songs and did a great job. My thoughts are with Pat’s family.

Remember, I’m not even 5ft tall, so at any show I usually stand up front so I can at least see something. We got there early enough last night for me to get a place where I stood last time I seen Anti-Flag. Right in front of the bassist. He’s one of the two I mentioned before who remembers me. As any punk show, shit got crazy. The number one rule at a punk show – if someone falls down, pick them up. People were falling down, onto me. Which I’m used to at shows, I’m not a fragile flower. It didn’t help that there was this crazy, super drunk, lady beside us. She was like laying back on everyone and just killing this poor kid – who it looked like this was his first show. Not to mention she kept wanting to touch the bass – which was making me upset because she was just…ugh…super drunk. Anyways…After a few songs the bassist told me to sit on the front of the stage, which was fine with me. Sadly after one song I was moved more to the side of the stage. Either was, I was still able to enjoy the show and have fun.

Today though the pain of going through the show is setting in. Sore throat, bruises and feet pain.

The sore throat is kind of obvious. Screaming lyrics from an hour will have that effect on you, seriously. But in the end, it’s well worth it.

The stage at the Grog Shop is right at knee height for me. So anytime anyone behind me pushed me forward my knees were going right into the stage. There were also people who needed a tutorial on how to stage drive, one guy jumped too far back on the stage like right at us and ended up kicking me in the hip while he was trying to get to the crowd. My left knee was stuck against the stage at one point, as well as the last time people fell down toward me. My knee is bruising pretty bad for that, but the best thing is that I took today off – just for these reasons. But I have to walk to work tomorrow at 4:30am. Hopefully people have more snow moved and the snow that’s left is packed down enough that I don’t kill myself.

So as I sit here on my random day off, here’s some pictures and a few short clips from the show. I need to file my taxes now.